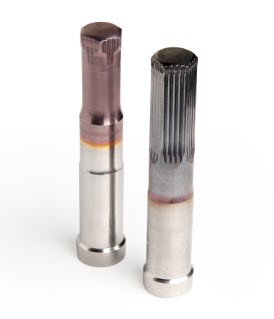 The perforating punch is an essential yet fragile part of the die assembly; it is the component most likely to fail to result in productivity loss. Structural soundness is impacted by material and construction details. Therefore, tool steel selection plays an important role in punch performance. However, tool steel selection is largely dependent on individual preference and application requirements.The success of a perforating punch is largely dependent on two key criteria:

When it comes to punch performance, other key criteria include the following: strength; load distribution; fatigue-resistance.

The perforating process subjects punch components to a variety of forces, including the following: compressive tensile forces; frictional forces; and, deflecting forces.

What is The Perforating Process?

After the hole and slug have been produced, the direction of punch travel is reversed so that it withdraws from the workpiece. A stripping mechanism is often used to restrain the workpiece during punch withdrawal.

Punch durability is largely dependent upon induced stress levels (relative to the ultimate strength of the component material). Due to the nature of applied loads, breakage generally occurs during the perforating process, whereas, most cutting-edge wear develops during stripping.

For perforating punches, head breakage is a serious concern. Often times, this concern can be mitigated by increasing the shank diameter so that the load is distributed over a larger area, thereby reducing the stress value.Another concern is bending or buckling problems, which can develop as a result of the magnitude of deflection and its propensity to increase component length. 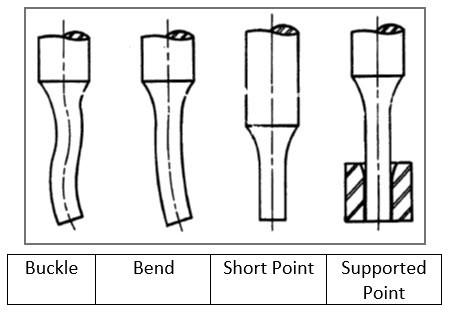 Improved punch durability can sometimes be achieved by a blend radius that reduces stress concentration in critical areas. For example, cutting edge chipping can be reduced or eliminated by stoning a .002” to .004” radius or chamfer on the component. This procedure effectively increases the contact area resulting in a lower stress level.

Frictional force is equal to the stripping load and directly related to the rate at which the component cutting edges erode. Factors impacting the magnitude of frictional force and, consequently, wear rate are expressed in the following formula: F = uN where F = Force of Friction (lbs.), u = Coefficient of Friction, and N = Normal Force (lbs.)

Punch-to-die alignment is an expression of the degree of clearance uniformity between corresponding points on the cutting periphery between a punch and die button. The equation is relatively straightforward: better alignment equals more uniform stamping; and, more uniform stamping equals greater production quantities (by a given die assembly). Non-uniform clearances subject a punch to unbalanced loads. Unbalanced loads result in deflection, which ultimately leads to premature component failure. To ensure punch-to-die alignment during the die construction assembly phase, special attention should be given to the following factors:

Customers sometimes require non-standard solutions for their punch and die button applications. Tipco is an excellent resource by providing access to all standard high-speed steels, powdered metals, and coatings to solve the most demanding metalforming applications. 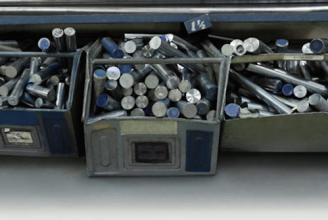 Tipco’s primary material is M2 for metalform tooling but can manufacture from bar stock in a wide range of cold work and powder metallurgically produced tool steels such as A2, S7, D2 and 1%, 3%, 4%, 9%, 10% and 15% Vanadium Steels.